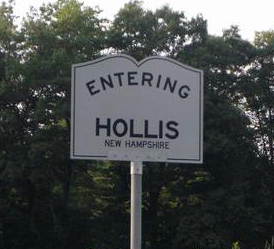 ﻿﻿How the Town of Hollis got its Name
by Mary Brickley﻿﻿

In 1746, the district of West Dunstable was divided into four townships by order of the Royal Governor, Benning Wentworth: Dunstable, Holles, Merrimack, and Monson. The Secretary of State for the Colonies at that time was the Duke of Newcastle, and his family name was Holles. It was usual for the Governor to name towns chartered by him in honor of his friends and patrons.

Eventually, the spelling was changed to Hollis, possibly because Harvard University graduates were aware of "Hollis Hall" there, named after a generous benefactor, Thomas Hollis, a wealthy London merchant. This happened sometime after the town was named. There are no families named "Hollis" living in the town at the time or in the past.