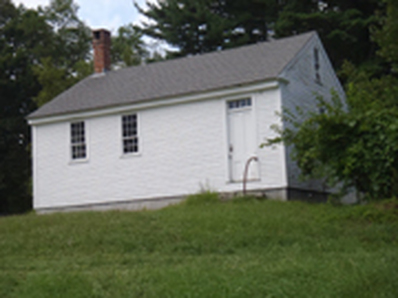 The Pine Hill School District in Hollis, NH, has two extant schoolhouses. The so-called ‘Old’ Schoolhouse now stands at 69 Ranger Road, but it has had a much travelled history. By the turn of the century, 1800, Hollis had divided its 30 square acres into 14 individual school districts. Each district was comprised of a number of local families, though the boundaries and the families in each shifted according to the demographics of the time.

The Hollis Map of 1858 shows the ‘Old’ Schoolhouse location on the northern side of Pine Hill Road at the intersection of paved Nartoff Road (formerly also known as Pine Hill Road). At this time, the building was probably 22 feet by 22 feet square, covered in pine boards, and heated by a large fireplace. There was perhaps a woodshed and an outhouse.  In 1874, due to diminishing enrollments, the Pine Hill District and the Brimstone District voted to combine their two districts into one. The Brimstone School building, located at the corner of Parker Lane and Rideout Road, was sold and the Pine Hill School building was moved over the hill and relocated at approximately 82 Ranger Road to be closer in distance for the students from Brimstone to access either by foot or buggy.

It was probably then that the school was enlarged by six feet in length to make room for an entryway and a wood storage area for the stove and also a small indoor privy. By 1916, it was determined that the ‘Old’ one-room schoolhouse was too small. That fall, the younger students were being taught by one teacher in the entry/woodshed area and the older students were taught by another teacher in the schoolroom. Over Christmas, a ‘new’ Pine Hill School, now converted to a residence at 84 Ranger Road, was opened and the students returned to a modern school that had two rooms, lots of windows and a furnace in the basement for heat.

The ‘Old’ Schoolhouse was then sold to a neighbor, Mr. John W. Howe of 26 Howe Lane, who had attended the Pine Hill School in the 1870’s and ‘80’s. He rolled the building on logs a short distance onto his property at the edge of a field. The building was set on a new stone foundation and used as a farm outbuilding for many years. The cellar was used for apple storage and one year Mr. Howe offered to let the Harriman family live there when they were in need of a home. Mrs. Harriman gave birth to a daughter, Leila, when living at the schoolhouse.

Over the years, the ‘Old’ Schoolhouse fell into disrepair, although it was still a great place for Mr. Howe’s grandchildren to play during the 1940’s and ‘50’s. In 1992, one of Mr. Howe’s granddaughters purchased the building from the Howe family estate.  It was dismantled, structural repairs made, and re-erected in 1993 at 69 Ranger Road within sight of its earlier location when used as a schoolhouse. The ‘Old’ Pine Hill Schoolhouse is the only one-room schoolhouse still standing in Hollis that has not been markedly changed or converted to a residence. Its interior remains much as it was when used as a school. It is now owned by Sharon M. Howe who maintains it as a local museum.