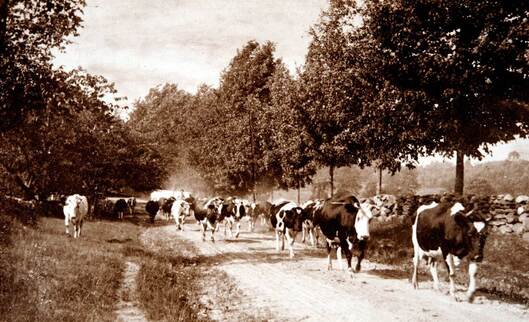 ﻿A Br﻿ief Early ﻿History of Hollis
by
Joan Tinklepaugh, Historian﻿

﻿When Peter Powers hiked into West Dunstable Territory in 1730 and began to build a log cabin for himself and his family, he was starting a new life and a new town. By 1731, Peter, his wife Anna Keyes, and their two infant sons, Peter and Stephen, had settled in area that was to be called Hollis.

In 1746, Hollis received its charter from the Royal Governor of New Hampshire, Benning Wentworth, and established the town government. During the fifteen years between the arrival of Anna and Peter and its official recognition as a chartered township, Hollis grew from one family in a wilderness on the fringes of what is now Silver Lake, to forty-three families with a church, a graveyard, and a town common.

Daniel Emerson had been selected by a committee consisting of Peter Powers, Eleazer Flagg, Samuel Cumings, and others in 1743 to serve as minister of the town. A Harvard graduate, Emerson proved to be a bargain for the Hollis families. He not only served his entire life as minister of the church, but taught its young boys and prepared them for college. His ministry was such a success that the original church was torn down and replaced by a larger one within a few years. At the close of Reverend Emerson’s life in 1801, there was need for a much larger and more elaborate church, which was built in 1804 and served by his grandson-in-law, Reverend Eli Smith. Emerson's impact on Hollis was long lasting. He and his wife Hanna produced a large family that was devoted to Hollis for many generations.

In the 1750’s, a militia from Hollis, headed by Peter Powers and counseled by Reverend Emerson, fought the Indian wars at Crown Point, New York. With the disappearance of the major body of Indians to the north and the settlement of French Indian War in the British favor, Hollis became less of a frontier town and more of an established community. The prominent families included the Colburns, Cumings, Flaggs, Farleys, Worcesters, Eastmans, Boyntons, Bloods, Jewetts, Proctors as well as the Emersons and Powers. These were the families that were to dominate town history for at least a century.

By the time of the Revolutionary War, Hollis was the residence of two hundred and eighty families scattered over about thirty square miles. It was a town which had developed a patina of civilization with a productive town government, home to both farmers and tradesmen. This gentle society was to be disrupted by British attempts to subdue the rebellious Minutemen at Lexington and Concord.

News of this calamitous event spread rapidly even in the days of cart and horse. Within hours of the early morning skirmish at Lexington Green,  Deacon John Boynton, who lived at the southern edge of Hollis bordering the Massachusetts line, was galloping through town spreading word of the British attack. Almost every male in Hollis old enough to carry a gun rushed to the Town Common, ninety-two in all, to become part of the twenty thousand men of New England that besieged the British in the Cambridge Campaign. These early confrontations included The Battle of Bunker Hill where Nathan Blood, Phineas Nevins, Issac Hobart, and Thomas Wheat lost their lives.

There were also a few Hollis Tories who did not wish the rebels well. They were represented by the aristocratic families whose homes circled the Town Common such as the Cumings and the Whitings. Some members of these families were exiled for the duration of the war and never returned even though their young wives and children remained behind in Hollis. It is rumored a few of them died fighting for the British.

Before the outbreak of war with the British, the town had prepared for war. In November, 1774, Stephen Jewett, Stephen Ames, and Rueben Dow were sent to represent Hollis at the Congress in Hillsboro County where a resolution was adopted that said in part, "That we will at all times endeavor to maintain our liberty and privileges, both civil and sacred, even at the risque of our lives and fortunes."

In spite of the hardships, most Hollis families fiercely clung to their belief in liberty. Between 1776 and 1781, there were many upheavals in the homes of Hollis. Two hundred and fourteen men from Hollis were considered fit to "do service" in the first year of the war. As the war dragged on for almost six years, men from Hollis served at Ticonderoga, Bennington, White Plains, and Valley Forge. Those at home struggled with food shortages, small pox, and quotas for men and goods. Families were devastated by the loss of one or more members in battles with bullets and disease. When it was all over, Hollis was part of a new country with an original concept about the rights of the individual and the responsibilities of the state.

Shortly after the close of the Revolutionary War, the population of Hollis was nearly fourteen hundred fifty. The town had at least two taverns, one church, several schools, and about two hundred fifty homes. The roads that ran through Hollis carried commerce from Amherst, Pepperell, Milford, Nashua, and Boston. Patch's Corner at the crossing of the present South Merrimack and Silver Lake roads boasted a general store, cooper shops, blacksmith and a shoemaker.

Reverend Emerson, who had come to Hollis at age twenty-six, was now in his seventies. Widow Anna Powers, the town matriarch, was eighty-two. Her husband, Peter Powers, had not lived to see the Revolution. All eight of their sons supported and survived the Revolution.﻿